Parkinson’s disease (PD) occurs when brain cells that normally produce dopamine stop working or die. The death of these cells leads to abnormally low levels of dopamine, a chemical which helps relay messages between areas of the brain that control body movement. PD is called a movement disorder due to the following typical motor symptoms:

Other physical changes include speech problems and swallowing problems.4

Symptoms of PD, and the way they progress will vary from person to person. Appropriate treatment can have a significant impact on how well a person lives with PD.

Treatment for PD involves a combination of medication and therapies, to address the wide range of symptoms:

The Role of Speech Pathology

Most people with PD will experience changes in speech, voice and swallowing at some point during the course of the disease. 90% of people with Parkinson’s are at risk of developing a weak voice that can lead to serious speech and swallowing difficulties.6

Some of the most common changes to speech and swallowing in PD include:

Speech Pathologists have a crucial role in the assessment and management of communication and swallowing disorders.

Visit the below sites to find more information about Parkinson’s disease: 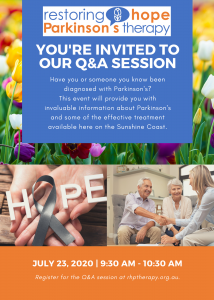 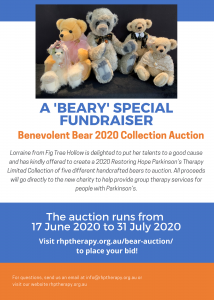 Restoring Hope Parkinson’s Therapy is committed to your wellbeing at this time.  Click here to find out more.

Request Telehealth
Please enter your details below
and one of our friendly staff will give you a call
to answer any questions you may have.